Here are some exciting new projects
we've been working on In case you may have missed it, Apple’s iOS 14 launch caused quite the stir in online advertising. Check out our blog to learn about the beef between Facebook and Apple, and to learn more about iOs 14 App Advertising.

In June 2020, Apple announced that iOS 14 would prioritize user data and privacy. This has a huge effect on iOs 14 app advertising. Facebook challenged them with the counterargument that the update was not about user privacy, but a cash-grab from Apple that could make internet use more expensive. According to The New York Times, Facebook is prepping to take this matter to court, with an antitrust lawsuit on the way. Facebook even took out a full-page ad in the New York Times: Prior to iOS 14, app users did not have a choice to opt-out of being tracked in terms of ads. With Apple’s new AppTrackingTransparency framework, app users will see a notification (Facebook calls discouraging) which will ask the app user:

“‘X APP’ would like permission to track across apps and websites owned by other companies. Your data will be used to deliver personalized ads to you.”

In addition to the ‘discouraging’ permission request, Apple also will allow iPhone users to view the types of data that apps collect and if that data is used to track them or is linked to their identity or device. 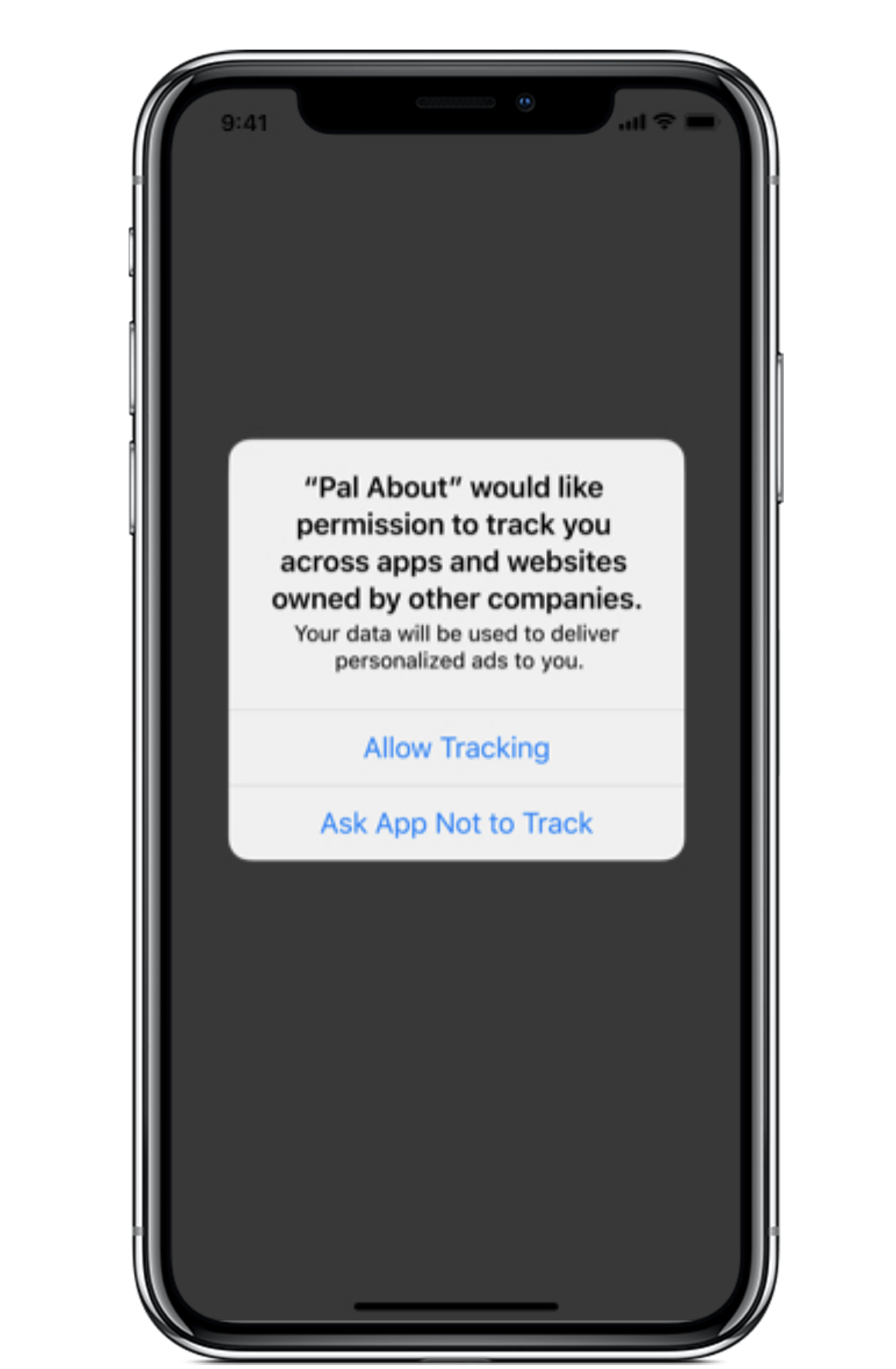 Apple Push Notification for all app users with iOs 14.

Here are examples of what Apple considers tracking:

Because personalized ads are how Facebook has remained the king of online conversion-based online ads, this poses a huge threat to the effectiveness of their personalized app ads.

With the sweeping and seemingly unexpected update, Facebook has been very clear on their position, these privacy changes Apple is making are not in the best interest of users, and will be detrimental to small businesses.

In Facebook’s official statement they got right to the point, four points actually:

While it is unclear if this is just the tip of the iceberg, it is worth looking into your current advertising strategy and preparing for further changes from Apple.

One of the biggest challenges with the new iOS 14 app advertising update is the ability to track user behavior and connect that data with third-party apps, (Facebook). In the past, advertising your app would work by implementing the Facebook Software Development Kit (SDK).  You could remarket specifically tailored ads, often dynamically created, to a user who took specific actions in-app.

With the new pop-up asking to allow or not allow tracking in-app, this is no longer guaranteed. If a user opts out of being tracked, remarketing in this way will not be possible for that user.

Check out this awesome explainer video Axios Studios created with Facebook that explains exactly what is a personalized ad, why it is important, and why it matters what Apple is doing:

Apple is also allowing app owners to offer an explanation as to why they should allow app tracking, “as long as you are transparent to users about your use of the data in your explanation.”

In our experience at Advertise Golden, we have worked with a variety of different apps with a heavy focus on app installs and converting new users. Some of which have been affected by the new iOS 14 updates, and some that have not. We believe using other channels like push notifications or email are a much more efficient and cost-effective way to convert new users.

One thing that we have seen companies do is simply build an online app on their own website, which is a mirror of the Apple version, to avoid Apple’s stringent policies. There are several ways that you can obtain the flexibility you need in order to be able to serve your application needs  According to Andrew Sherman @ the Virtual Window (an app and web development firm in Bethesda, MD www.virtualwindow.com) businesses need to carefully consider their objectives when determining the best channel for delivering their app and must balance between functionality and flexibility in order to provide the best experience for their intended audience while at the same time being mindful of privacy concerns.

With app install campaigns seemingly safe for advertisers, for now, this shift to data privacy has led us at Advertise Golden, to advise our clients to control what they can, utilize tools that are still available to them, like highly targeted email drip campaigns, targeted push notifications, and to continue to look at other sources for app installs than just Facebook.

One of those other sources for app installs is Apple itself. Apple Search ads are highly effective and can garner great results. You can advertise your app above competitors in the Apple App Store, or bid on certain keywords or phrases to have your app display in a sponsored top spot. To learn more about Apple Search Ads, check out this Apple resource.

Google is a great platform for user acquisition campaigns. With Google, ads will serve on the Search Network (and search partners), the Google Display Network, YouTube, and even in the Google Play Store (for Android apps). Similar to Facebook’s App Event Optimization campaigns, Google allows for optimizing your campaign for install volume or specific events. You can set target cost for in-app actions or installs

When starting any user acquisition campaign, it’s best to take an approach that takes multiple channels into account. Channels like TikTok and Snapchat can offer low-cost user acquisition alongside Apple, Google, and Facebook. Email marketing and push notifications are also a low cost and highly effective way to re-engage your current user base. Here are a few steps to take when you are creating your paid media strategy for your mobile app:

If you have an app and are interested in advertising online, or are interested in having a team of professionals evaluate your current marketing efforts. You can schedule a free consultation with someone from our team today!

Advertise Golden is a growth marketing agency that focuses on optimizing paid media channels to drive growth metrics. We partner closely with all of our clients to become a data-driven extension of their marketing department.

We specialize in conversion rate optimization and strategize closely with your team to define conversions that drive your bottom line. We extensively test and optimize all of your paid channels to maximize our outputs. Our specialization allows us to achieve best-in-class results, and we treat every client like they’re our only client.

With experience ranging from Hospitality to Enterprise B2B, there’s a reason 70+ companies have trusted Advertise Golden.

Let's get in touch

We love starting new projects! Send us a message and we can schedule a call to review your goals.